I am Lt Col Yogesh Jain, a retired Army Officer, currently working as Deputy Director in an Engineering College in Sonepat. I opened this website after being fooled by an old friend Brig RK Nambiar. He took money from me on false pretext. Told me lies about his location for one year. On investigation, I found that he had cheated many more... taking their money and vanishing from the place...His victims do not know where he is. 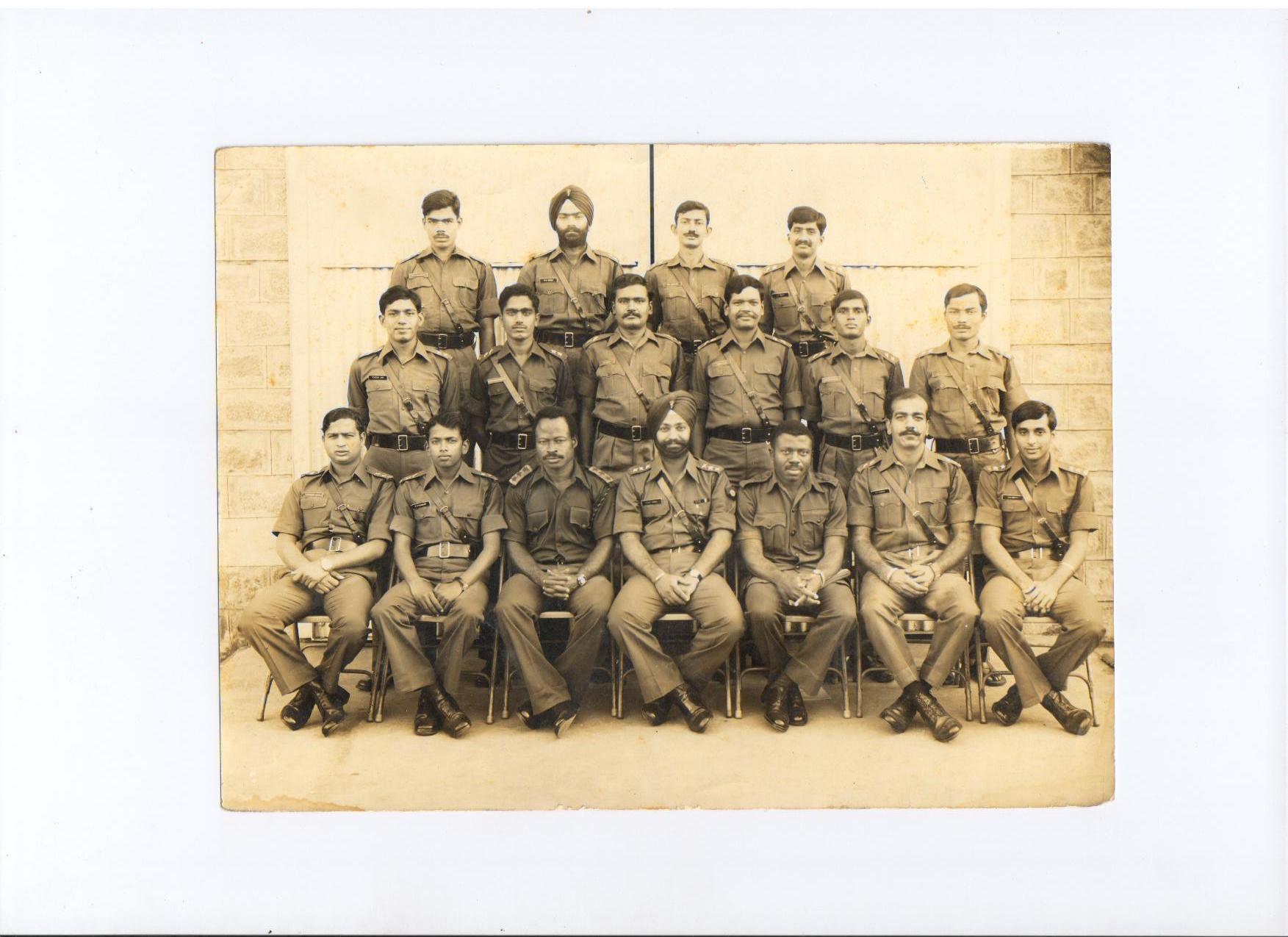 This site is about a retired Army Brigadier who is using/ has used three identities, two of them for opening various bank accounts and borrowing money from his old friends (not to return) and the third for getting his pension from the Army. The person is my batch mate from IMA and Vadodra. In the above picture he is sitting second from left.

The content is to make the general public aware of the habits of the person and to caution them in dealing with him. Secondly, to locate him so that criminal and civil proceedings pending against him in Rajasthan and Haryana Courts can progress. I, Lt Col Yogesh Jain, is fully responsible for all the information in this website.

Brig RK Nambiar is a conman. He is able to get high position jobs due to his high army credentials. He borrows money from his colleagues by giving some sob story and then vanishes form the area. He rings up his very old friends and request them to transfer huge amounts through NEFT. He gives false information about his current location. After transfer of money in his account he stops picking up the telephone of his friends. He is a cheat.

Please contact me at 9812421123 or yjbmiet@yahoo.co.in if you know the current whereabouts of above person.

The complainant is a reputed retired Army Officer and currently working as Deputy Director of BM Institute of Engg. and Tech. Sonepat. The accused/ respondent Brig RK Nambiar (Retired) alias Mr. Ravindran KN purportedly r/o 1701, Tower 8, Sushant Estate, Sector 52A, Gurgaon and the complainant knew each other as army officers 36 years ago in IMA Dehradun, but had had no contact till March, 2013.

Note: He has changed his pension account from the above bank also

That as per my information on him a loan of Rs 14,45,529/ is outstanding against the person with above PAN Card and name.

That in 2012, the accused/ respondent fraudulently obtained another PAN Card with number BFOPR6351P from IT Authorities by submitting false documents of his age as 04/06/1957 and name as Ravindran Keshavan Nagapuram (Ravindran KN) to escape the dragnet of law and to avoid repayment of loans obtained from various banks and to avoid payment of taxes.

That now it is found that the accused/ respondent opened at least three accounts in banks namely, PNB,SBI and Syndicate Banks at Bangalore with the help of false addresses, false PAN Card, to deceive his old friends. He gave different stories to different friends on telephone and obtained heavy loans from February 2013 to April 2013. In each case, after the loan was transferred to him, he stopped picking up their phones. He avoided the direct contact as he never gave his correct location or place of working to any of his friends. A list of such friends, the amount of loan transferred through internet, his account in which this amount was transferred is attached below:

That, in order to cheat the complainant by hiding his location, the accused/ respondent issued multi city checks drawn on SBI, Bangalore in April 2014. The accused/ respondent, falsely mentioned his address as c/o 23/56, Station Road Dhamteri on the envelope containing the cheques, whereas he was a resident of Gurgaon at that time.

That the two cheques of Rs 45000/ each were dishonored by the SBI, through Clearing House at Sansad Marg Delhi on 19/09/ 2014 due to the instructions of the accused/ respondent to `STOP PAYMENT’ . Thus, the accused/respondent, with dishonest intentions, has defrauded the complainant of his money. Stopping payment without giving any reason meant that the he was not even accepting his liability.

That the accused/ respondent joined Singhania University, Pacheri Bari, Jhunjhunu as its Pro Vice Chancellor in August 2014. However, in another attempt to hide his location and cheat, issued a multi city cheque for Rs 75000/ drawn on a branch of PNB, Bangalore and sent the same in an envelope with his address mentioned as Station Road Dhamteri, by speed post to the complaint. On presentation, this cheque was dishonored by PNB at Sonepat due to the reason, “Funds Insufficient”.

That the accused/ respondent was sent a notice on 17/10/2014 by the complainant under Sec 138 of Negotiable Instrument Act on 27/10/2014 at his then address of Singhania University, Pacheri Bari, Jhunjhunu. However, it is now known that the accused has gone missing from Pacheri Bari as well. On inquiry from the University, the Complainant was shocked to find that the accused/ respondent borrowed about 2.5 lacs from 5 different persons and issued checks to them of another bank account opened at PNB Jhunjhunu all of which have been bounced. The details of such victims is attached.

Money collected fraudulently at Jhunjhunu while he was Pro Vice Chancellor of Singhania University from August 2014 to October, 2014

That the accused has finally defrauded the Complainant through sheer unscrupulous tactics and lies. While the accused claimed to be in Chhatisgarh or in Bangalore, he was in fact not there. The accused has been scrupulously concealing his whereabouts to escape the dragnet of the law. It is now also apparent that the intentions of the accused all through was dishonest and he intentionally and purposely handed over the cheques, which he never intended to honor. By his act of issuing the aforesaid cheques in favor of the Complainant and thereafter, failing to honor the cheques in question, the accused has inter-alia committed the offence of fraud, cheating, criminal breach of trust punishable under the Indian Penal Code, 1860 and is liable to be prosecuted under the provisions of the said act. Furthermore, the accused is liable to be punished under section 138 of Negotiable Instrument Act and under section 420 of Indian Penal Code.

“18. We feel compelled to reiterate our empathy with a payee who has been duped or deluded by a swindler into accepting a cheque as consideration or delivery of any of his property; or because of the receipt of a cheque has induced the payee to omit to do anything resulting in some damage to the payee. The relief introduced by Section 138 of the NI Act is in addition to the contemplations in the IPC. It is still open to such a payee recipient of a dishonoured cheque to lodge a First Information Report with the Police or file a Complaint directly before the concerned Magistrate. If the payee succeeds in establishing that the inducement for accepting a cheque which subsequently bounced had occurred where he resides or ordinarily transacts business, he will not have to suffer the travails of journeying to the place where the cheque has been dishonoured. All remedies under the IPC and CrPC are available to such a payee if he chooses to pursue this course of action, rather than a Complaint under Section 138 of the NI Act. And of course, he can always file a suit for recovery wherever the cause of action arises dependent on his choosing.”

That it is prayed: